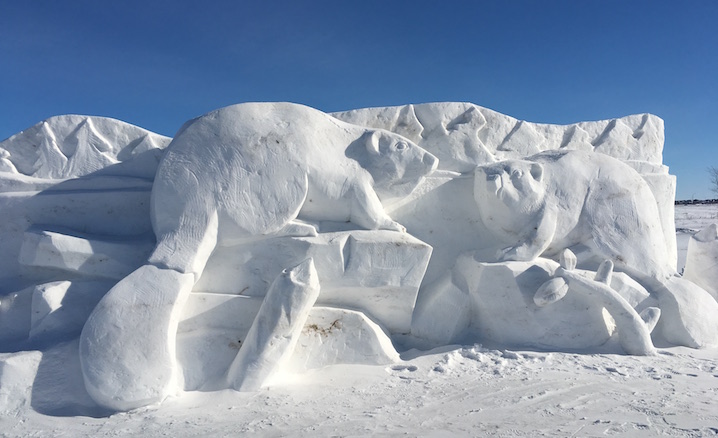 Immerse yourself in Manitoba’s rich French Canadian culture by experiencing traditional art, rhythmic music, delicious cuisine and cultural entertainment during this year’s Festival du Voyageur, on from February 17th until the 26th.

Qualico Communities has been sponsoring the Festival for over 10 years and Sage Creek is proud to be partnering again as a major sponsor.

“We’ve always strived to recognize the history of St. Boniface in Sage Creek,” says Sarah Anderson, of Qualico Communities. “We are part of the South St. Boniface ward and have incorporated many historical names that represent the history of the Métis and Francophone into our community.”

For the eighth year in a row, Sage Creek has commissioned a snow sculpture in our backyard to support and celebrate the spirit of Festival du Voyageur and showcase incredible talent. David MacNair, an artist and sculptor, along with 3 other artists (Dave Maddocks, Barry Bonham, Jim Alexander) and Gerry Paquin who is responsible for removing the snow, have created a spectacular and eye-catching sculpture to celebrate Canada's 150th anniversary.

“The beaver and the fur trade era were significant to the development of our country, says MacNair who has been sculpting snow at the Festival du Voyageur for close to 30 years. “We decided to design the piece with an older and younger beaver pair.”

It took MacNair and the team approximately 70 man hours to complete, excluding the design process, and weighs in at around 70,000 pounds and is 28 feet long, 10 feet tall and 8 feet wide!

You can view the sculpture which will be on display at the intersection of Lagimodiere and Bishop Grandin.

Day passes, 10-day passes and family packages are available to purchase right here at the Sage Creek Sobeys and other Safeway and Sobeys around the city. There will also be tickets available on the festival grounds or online.